Mantle long, cylindrical and muscular, widest at midpoint. Fins triangular, muscular, relatively short and broad (length 42% of mantle length, width 57% of mantle length). Fin angle broad, 47 to 52°. Arms very long, averaging up to 72% of mantle length for arms III in males; all arms of males significantly longer than in females. In mature males, left or right arm IV has suckers modified into suckerless knobs along more than 50% of its length (modification for transferring spermatophores to the female). No hooks on arms, suckers in two rows, sucker rings with several teeth. Colour orange to reddish-brown, darker along dorsal midline of mantle.

18 to 50 cm mantle length when caught in the FICZ.

Throughout the western South Atlantic, approximately 30°S to 54°S, and west of 55°W.

Between 1987 and 1992, this fishery brought in 75 to 85% of the fishery revenue to the Islands. Mainly fished for by jiggers from Taiwan, Korea and Japan, with the fishing season in the FICZ from March to May.

The Illex stock migrates south and east into the FICZ from late January onwards, and migrates north and west out of the Zone in May and June. 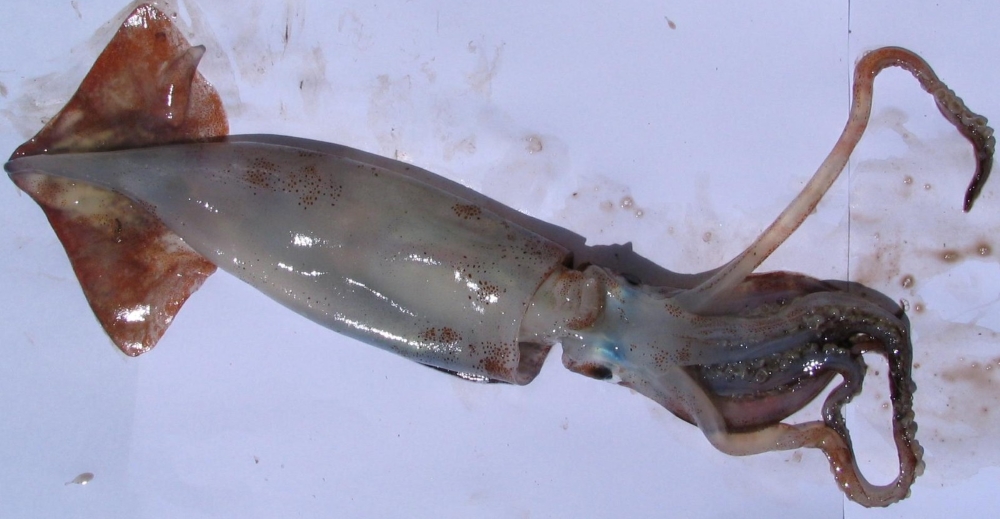