In essence, all four offshore basins contain more or less thick Mesozoic and thinner Cenozoic sediments, and each has considerable but under-explored petroleum potential.

The North Falkland Basin (NFB) to the North of the Islands is a classic failed rift basin with a predominantly lacustrine infill. Six wells were drilled in the NFB in 1998; none were commercial successes, but five had oil and gas shows (including one which recovered live oil to surface), encouraging further exploration of the area. A further 16 exploration and/or appraisal wells, plus two sidetracked wells designed specifically to core reservoir section, were drilled in the NFB during the second drilling campaign in 2010-12. During this second campaign the Sea Lion oilfield and its associated nearby satellite fields Casper (gas and oil), Casper South (gas and oil) and Beverley (gas) were discovered on the eastern flank of the basin, while the Liz field (wet gas/condensate and dry gas at a deeper level) was discovered on the western flank of the basin.

The Falkland Plateau Basin (FPB) to the east of the Islands is a classic passive margin basin with a predominantly marine infill. One well was drilled in the relatively shallow waters of the western part of the Falkland Plateau Basin in 2010 but was dry. Subsequently, two wells were drilled in the deeper water north-eastern parts of the basin during 2012, and both encountered gas that did not flow to the surface.

The South Falkland Basin (SFB) to the South and South East of the Islands comprises both a thrust belt and an associated foreland basin with marine sedimentary rocks. Two wells were drilled in the SFB during 2012; one was drilled in the thrust belt immediately south of the Islands but encountered technical problems whilst drilling and never reached its planned terminal depth, whilst the other, drilled on a tilted fault block in the foreland basin north of the thrust belt was a gas condensate discovery (Darwin). 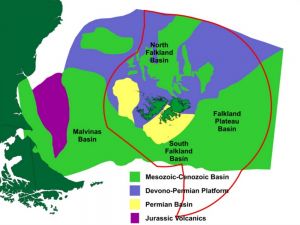 The Falkland Plateau Basin, Malvinas Basin and South Falkland Basin together comprise the Southern Basins and lie to the east, west and south of the islands respectively. These basins are interconnected, and although their tectono-stratigraphic histories vary, regional correlation of major seismic reflectors between basins allow comparisons to be made.

The Falkland Plateau Basin to the east of the islands has a NE-SW trending faulted western margin, and terminates eastwards at the Maurice Ewing Bank, a bathymetric high some 250 km east of the islands. The Maurice Ewing Bank was drilled by the Deep Sea Drilling Project (Barker et al. 1976), and these boreholes provide an insight into the stratigraphy and petroleum potential of the Falkland Plateau Basin; see Southern Basins section for more details.

The Malvinas Basin to the west of the Falkland Islands appears to have a generally unfaulted eastern margin. It has been explored by about 17 commercial boreholes in Argentine waters, and data from these wells can be traced eastwards into Falklands waters; see Southern Basins section for more details.

The South Falkland Basin separates the Falkland Plateau and Malvinas basins and trends east-west along the northern side of the Scotia/South America plate boundary. The basin plunges steeply to the south, into the plate boundary thrust zone.

The North Falkland Basin is structurally isolated within the Falkland Plateau north of the islands. This basin has been the most extensively drilled of all the Falkland Islands offshore basins.

The Falkland Islands presently lie at the western end of the Falkland Plateau, a displaced terrane (or group of terranes) that may have lain adjacent to the eastern coast of southern Africa and Mozambique before the start of breakup of Gondwana in the Jurassic and the opening of the South Atlantic in the Early Cretaceous (Martin et al. 1982; Norton 1982; Martin 1986; Lawver & Scotese 1987; McKerrow et al. 1992) and Adie’s 1952 reconstruction.

Although the hypothesis of micro-plate rotation as a controlling factor in the development of the area is now generally accepted, offshore mapping by the British Geological Survey has cast doubt on the validity of the hypothesis. These workers (see Richards et.al. 1995, for a somewhat dated review of the various arguments) instead preferred to image the Falklands Plateau as a fixed, rigid plate, that translated to its present position without micro-plate rotation. They envisaged that the Islands started somewhere further southeast off the coast of South Africa than do workers who prefer the rotational model. Available evidence from onshore tends to support the rotational hypothesis (see Stone et.al. 2009, although the same BGS workers continue to assert that the offshore evidence contradicts the onshore evidence and does not offer any support for the rotational hypothesis). 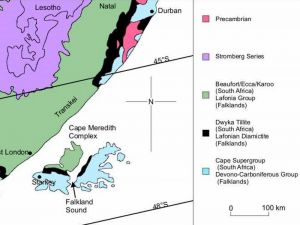 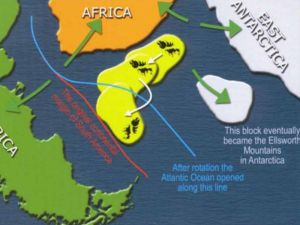 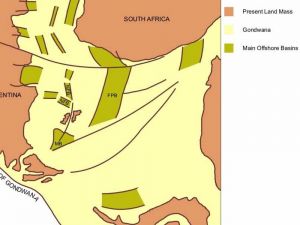