FIGAS has been an integral part of Falkland life since 1948. The service has gradually evolved from air ambulance, mail service and carriage of officials to passengers, freight, fishery patrol and scenic flights. 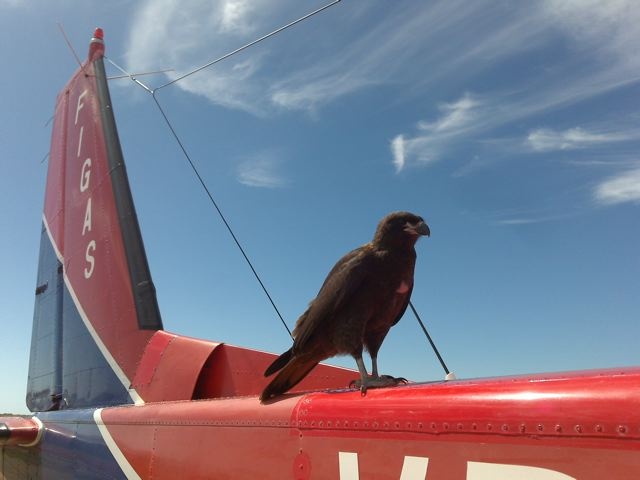 Today FIGAS remains an essential part of the Falklands transport infrastructure and way of life. The fleet now consists of five Islanders, one of which is a dedicated Maritime Patrol aircraft. Flying is becoming increasingly more seasonal with ground based tourists and local passengers making up most of the traffic. Round Robin flights, freight, fishery zone surveillance patrols, commercial charter operations and scenic flights compliment the core business.

1989 A third passenger transport BN2 Islander is added to the fleet.

1986 In December the Government, in conjunction with the British Government, implemented a 150 nautical miles licensed fishing conservation zone around the Falklands.

1985 The Beaver was retired having spent the latter months of it's time with FIGAS as a landplane.

1982 The Argentine invasion and subsequent conflict left FIGAS with no aircraft. Flights within the Falklands were by military helicopter until the arrival of a DHC-2 Beaver in December which entered service in January 1983.

1979 Registered VP-FAY, the first Islander was flown out from the United Kingdom via South America to the Falklands landing at the recently opened Stanley Airport on 04 October 1979.

1977 A FIGAS review committee was formed to consider suitable types of twin engine landplanes for future operations. Landplanes were considered to be more economical to operate than seaplanes and easier to maintain as they were less prone to salt water corrosion. The Britten-Norman BN-2 Islander emerged as the most appropriate aircraft and one was subsequently ordered.

1955 A second DHC-2 Beaver entered service and FIGAS gradually developed and improved the Beaver floatplane service. No more than two Beavers were in service with FIGAS at any one time and, following the retirement of the last Auster in 1956, they were the sole aircraft type operated by FIGAS until 1979.

1953 FIGAS officials realised that replacement aircraft needed to be procured and the rugged and reliable De Havilland Canadian DHC-2 Beaver was selected. The Beaver, when equipped with floats, would fulfil FIGAS requirements for the foreseeable future. The first Beaver entered service in August 1953. Two of the Austers and the Norseman were withdrawn from service.

1950 As a result of poor and often soft airstrips and the proximity of all settlements to the sea, it was decided to convert the two Auster aircraft to seaplanes. Another Auster Mk5 and a Norseman 5 were added to the fleet and the increased capacity enabled the fledgling air service to develop and passengers began to be carried on a more regular basis.

1948 The Governor arranges the purchase of two light single engine Auster aircraft. Captain Vic Spencer was appointed as the first FIGAS pilot along with Maurice Smith as first engineer and the Aircraft arrived in the Falklands late in the year. Following the arrival and shortly after the first test flight in December 1948 a small child required urgent medical attention at North Arm settlement. This resulted in the first passenger/medical flight undertaken in the Falklands. In Stanley the racecourse was used to take off and land.

1946 Governor Miles Clifford realises that the population living in remote settlements feel isolated. This is exaggerated at times of illness when the only way of reaching medical help in Stanley is by land or sea. The small population of the Falklands can't finance a road system. It is decided the way forward is to establish a Government backed air ambulance service.