- the Falkland Plateau Basin lies to the east;

- the South Falkland Basin lies to the south;

- the Malvinas Basin lies to the west, and most of the basin is within Argentine waters.

Although all connected, each of the three basins exhibits its own unique structural style. 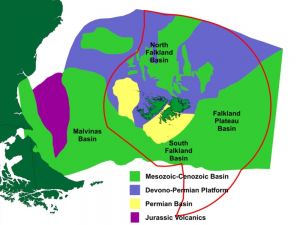 The Falkland Plateau Basin is essentially a passive margin basin, with Jurassic and Cretaceous marine rocks both gently onlapping onto, and prograding off, a Palaeozoic plateau. The basin lies beneath 200 m to 2500 m of water to the east of the Falkland Islands.

It is bounded to the west by the Falklands Platform, to the north by a steeply sloping feature termed the Falkland Escarpment, to the east by the Maurice Ewing Bank and to the south by the Scotia/South American plate boundary, which has a sinistral and northwards over-thrust movement. The plate boundary produces a topographic feature known as the Scotia Ridge, which includes shallow water areas such as the Burdwood Bank (immediately south of the Falklands), as well as the islands of South Georgia and the South Sandwich Islands.

To the south-west, along the deep water trough known as the Falkland Chasm, the basin merges with the South Falkland Basin.

The western boundary of the basin is defined by a north-east – south-west zone of onlap and minor faulting in a linear trend approximately 650 km long. There is a zone of high magnetic and gravity anomalies oriented along and (spread across) the western basin margin zone. Along the western margin significant faulting is observed at possible Permo-Triassic to Jurassic level.

The South Falkland Basin is a narrow basin zone to the south of the Islands that comprises Cretaceous passive margin-type rocks similar to those found in the Falkland Plateau Basin, but which have been partially overthrust by sequence of Cenozoic rocks along the boundary between the Scotia and South American plates. This basin forms a connection between the Falkland Plateau Basin and the Malvinas Basin. The basin lies beneath 500 m to 2500 m of water. The basin corresponds, more or less, with the deeper water zone of the Falklands Chasm, the foredeep that runs adjacent to the northern edge of the Scotia plate.

The basin is contiguous with the Malvinas Basin to the west and the Falkland Plateau Basin to the east, but has a somewhat different structural style.

Much of the normal faulting in the basin was probably of Jurassic through Early Cretaceous age, contemporaneous with the deposition of sediments in the actively rifting trough.

The Malvinas Basin is a Jurassic failed rift that deepens towards the south, where it is bounded by the transform and overthrust plate margin of the Scotia and South American Plates. The basin runs eastwards into the South Falkland Basin and lies beneath 150 m to 250 m of water. Most of the basin is in Argentine waters. 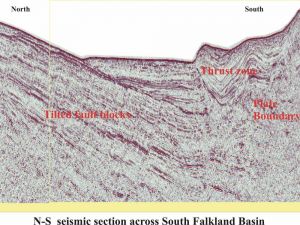 Permo-Triassic, Mesozoic and Cenozoic sediments occur beneath or within all three of the Southern Basins, and each interval could contain potential reservoir rocks. Excellent quality early Cretaceous reservoirs have been reported from the limited number of wells drilled in the South Falkland Basin and Falkland Plateau Basin.

The Lower Cretaceous Springhill Formation forms the main reservoir interval in the Argentine part of the Malvinas Basin, and may extend eastwards into the South Falkland Basin and Falkland Plateau Basin. Proximal sediments derived from the Devonian-Carboniferous Falklands Platform area may substantially improve reservoir quality locally at the Lower Cretaceous level in Falklands waters, in all of the Southern Basins.

Significant  reservoir intervals may also be found in lowstand systems-tract wedges and in major regressive systems that prograded eastwards and southeastwards off the Falklands platform. 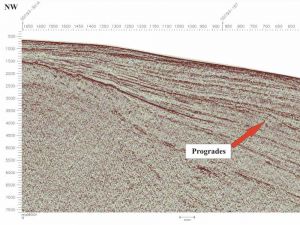 Five wells have been drilled in the southern basins in Falklands’ waters, with a further well currently underway:

Well 61/5-1 (Toroa) was drilled on the western margin of the Falkland Plateau Basin in 2010 to test a Springhill Formation onlap, and was plugged and abandoned as a dry hole but with good quality reservoirs.

Well 61/17-1 (Darwin) was drilled in 2012 to test a Cretaceous tilted fault block trap in the foreland basin that is developed to the north of the fold and thrust belt in the South Falkland Basin. The well was plugged and abandoned as a gas-condensate discovery.

Well 61/25-1 (Stebbing) was drilled in 2012 to test anticlinal closures within the thrust belt of the South Falkland Basin, but failed to reach its planned terminal depth due to technical problems whilst drilling. The well was plugged and abandoned with gas shows.

Well 42/7-1 (Loligo) was drilled in 2012 to test a stacked set of seismic high amplitude events covering over 6000 Km2 in the Falkland Plateau Basin. The feature may contain up to 100 TCF of gas in place, according to Falkland Oil and Gas Ltd (FOGL), although all attempts to recover gas to surface were unsuccessful due to the lack of conventional reservoir at this level. The Falkland Islands Government classifies the well as having been plugged and abandoned with gas shows.

Well 31/12-1 (Scotia) was drilled in 2012 to test a mid Cretaceous fan system with an associated seismic amplitude anomaly covering about 350 Km2 in the Falkland Plateau Basin. FOGL estimated that there may be up to 10 TCF of gas in place, although all attempts to recover gas to surface were also unsuccessful in this well due to the tight nature of the formation. The Falkland Islands Government classifies the well as having been plugged and abandoned with gas shows.

Seventeen or so wells have been drilled in the Argentine part of the Malvinas Basin, with some limited success.

The Southern Basins are at the earliest stage of exploration.

Potential 'play' types for these basins include:

There are now a wealth of exploration seismic data available for the southern basins.

All proprietary seismic data over five years old, plus some of the spec data over ten years old is freely available, under certain conditions, to bona-fide oil companies interested in exploring in the area: contact This email address is being protected from spambots. You need JavaScript enabled to view it.. Data delivery will be made at our discretion.