Until 1998, the only geological map of the Islands was a reconnaissance map constructed in the early parts of the last century, which had been subsequently modified from aerial photography interpretations without any ground-truthing. Between 1996 and 1998 the British Geological Survey re-surveyed the Islands and produced the first modern geological map.

The bulk of the Islands are composed of Silurian to Devonian sedimentary rocks, while the southern part of East Falkland (also known as Lafonia) is predominantly Carboniferous to Permian in age.

The oldest rocks on the Island are Pre-Cambrian gneisses and granite found at Cape Meredith in the very southern part of West Falkland, and the youngest occur as several suites of igneous dykes of Jurassic age that cut across the islands with various orientations 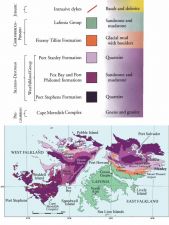 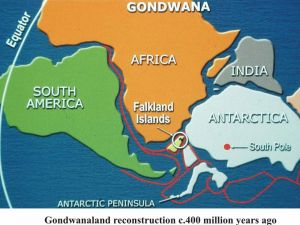 The geological history of the region

About 400 million years ago the continents of the Southern Hemisphere all lay adjacent to each other, forming the giant supercontinent of Gondwana. The Falkland Islands were tucked in between the future south-east coast of Africa and part of what was to become Antarctica.

The interior of Gondwana was underpinned by ancient crystalline rocks more than 1000 million years old, now represented in the Falklands by the Cape Meredith Complex, but its margins were covered by shallow seas.

Sand and mud deposited on the slowly subsiding continental edge are now found as far apart as South Africa, West Antarctica and Brazil. In the Falklands they are known as the West Falkland Group.

While the continental fragment that was to become the Falklands was still locked into Gondwana, it lay at a fairly high southern latitude. Around 290 million years ago the Carboniferous glaciation resulted in the deposition of the Fitzroy Tillite Formation in the Falklands; identical rocks are extensive in what is now South Africa.

Starting about 280 million years ago, the rocks were deformed and over-thrust into a mountain range, a fragment of which now forms the Wickham Heights in East Falkland.

A low-lying basin formed ahead of the mountain belt during the Permian, into which sand and mud deposits accumulated to form the Lafonia Group. Similar rocks fill the Karoo basin across southern Africa.

Early fragmentation of Gondwana in the Jurassic facilitated fracturing that was exploited by dyke intrusion across the islands.

During the early Cretaceous the South Atlantic opened, and the Falklands drifted to their present position offshore South America.

The two models for the break-up of Gondwana and the original orientation of the Falklands are summarised in the page on plate tectonic framework. 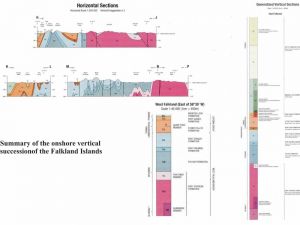 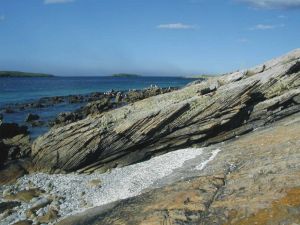 The oldest rocks in the Falkland Islands are gneiss and granite of the Cape Meredith Complex. They are about 1100 million years old and are exposed in the cliffs at the southern extremity of West Falkland. The complex is a fragment of the ancient crystalline heart of Gondwana, and has close geological similarities with parts of Natal in South Africa and Dronning Maud Land in Antarctica.

Quartzites, sandstones and mudstones of the West Falkland Group overlie the Pre-Cambrian gneiss and granite. The harder quartzite forms much of the high ground throughout the Falklands. Similar strata form Cape Town’s famous Table Mountain. These rocks were deposited in shallow, coastal marine setting. They are generally cross-stratified, from which it is deduced that depositional currents ran towards the north; similar rocks in South Africa were deposited by southwards directed currents, and this contradiction in current directions is used by some workers as evidence that the Falklands must have rotated after the sediments were deposited. The Fox Bay Formation sandstones in the middle of the West Falkland Group contain brachiopods, crinoids and trilobites; exactly the same assemblage of fossils is found in equivalent rocks from southern Brazil, South Africa and the Ellsworth Mountains, Antarctica – the Falklands’ neighbours in Gondwana.

The Permo-Carboniferous glaciation resulted in deposition of a widespread tillite across Gondwana. Known in the Falklands as the Fitzroy Tillite (and in South Africa as the Dwyka Tillite), it has a distinctive, dark coloured, fine-grained matrix enclosing a varied assortment of pebbles and boulders.

The remainder of the Permian section was deposited under largely post-glacial conditions.

The Black Rock Member of the Lafonia Group contains up to 40% carbon, and although post-mature for oil generation onshore, may still be a viable hydrocarbon source rock in offshore areas.

Volcanic detritus forms a large component of the Brenton Loch Formation, before a return to less volcanic detritus being evident in younger sediments of the Lafonia Group.

During the early stages of Gondwana fragmentation, dolerite dykes were emplaced across the Islands. A paper published by Stone et al. in 2008 shows that three sets of dykes can be identified, ranging in age from early Jurassic to mid Cretaceous. See Downloads for a copy of the paper.

Magnetic data from these dykes record a magnetic field running in the opposite direction to that derived from dykes of the same generation in South Africa. This has been used as evidence to support a rotation hypothesis for the Islands.

During the Permian and Mesozoic the Islands were subject to five phases of deformation:

D1 deformation occurred during the Permian and Triassic. It is represented by an east–west belt of folding and sub-parallel faulting. Accompanying metamorphism was mostly low grade.

D3 deformation appears to be confined to the generation of strike-slip faults and lateral rotation of older structures;

D4 is represented by brittle deformation in a high-level compressional regime, generating at least one major south-south-west-verging thrust sheet.

More details of the geology of the Falkland Islands can be found on the geological map and in the associated memoir and CD available for purchase from This email address is being protected from spambots. You need JavaScript enabled to view it.. 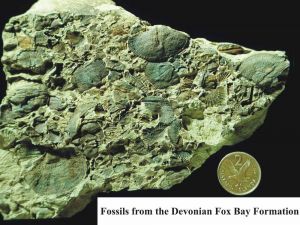 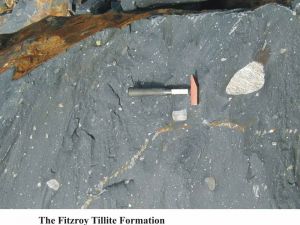 Before the Atlantic Ocean opened, the Falklands were joined to South Africa along the margin of the Gondwana supercontinent.

There are striking geological similarities between Falklands geology and South Africa’s Cape Fold Belt and Karoo Basin, and this has led to speculation that the Falklands might contain mineral deposits of the same style as the well-known, world-class African examples.

Recent exploration found some possible diamond-indicator minerals such as chromite and garnet, although there is no evidence that the chemistry of these minerals is indicative of an origin in a kimberlite pipe.

A comprehensive gold exploration programme was conducted in the early to mid 2000s by Falklands Gold and Minerals Ltd. They acquired an extensive aeromagnetic survey of the Islands, and subsequently drilled and cored many of the identified geophysical anomalies. However, they failed to locate any potentially viable gold deposits, and the company relinquished its exploration licence in 2008.

Garnet and rutile grains are concentrated in features such as raised beach deposits. These could potentially form extractable mineral deposits, but are at present considered to be uneconomic due to the geographical isolation of the Falklands. 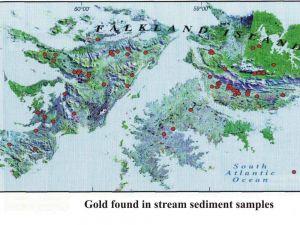 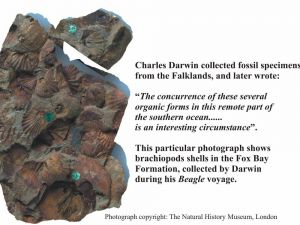 Charles Darwin was the first scientist to examine fossils in the Falkland Islands. He collected them from the Devonian Fox Bay Formation at Port Louis during his Beagle voyage.

The earliest signs of life come from the sandstone of the Siluro-Devonian Port Stephens Formation. However, no hard parts are found, and the evidence for life is present only in trace fossils such as Skolithos and Heimdallia. Falkland Islands fossils are most prolific in the Devonian Fox Bay Formation, which contains trilobites, crinoids and lots of brachiopods.

When glaciers spread across Gondwana about 300 million years ago they carried with them rock debris from their source regions. The tillite deposits they left behind characteristically contain assorted pebbles and boulders in a sandy-clay matrix. Some of the boulders present in the Fitzroy Tillite Formation consist of limestone, and were carried into the Falklands area from other parts of Gondwana; a few contain fossil Archaeocyatha, animals rather like primitive sponges. They are much older than all the other fossils, and were in fact extinct at least 50 million years before the oldest in situ fossil-bearing rocks in the Falklands were deposited. The limestone block probably originated in what are now the Transantarctic Mountains.

During the Permian the Lafonia Group was deposited in a huge lake system that developed across southern Gondwana. This lake was home to fish and a multitude of soft-bodied, crawling animals. Although no fossil fish have been found in the Lafonia Group, their presence is shown by trails. The photograph to the left is of a fish trail in sandstone from Camilla Creek. As the fish cruised close to lake floor their fins trailed in the soft sediment leaving parallel grooves behind. Driftwood from the surrounding forests was washed into the lake occasionally. In some places delicate leaf structures are still preserved from the Glossopteris-type trees that were a widespread feature of Gondwana 280 million years ago. 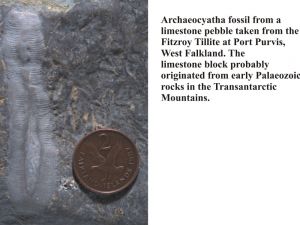 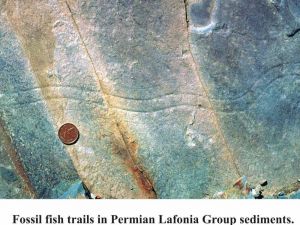 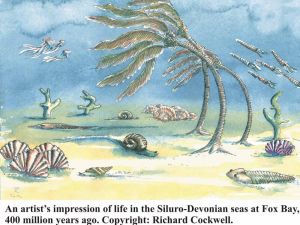 The landscape of the Falkland Islands is one of contrast. In East Falkland the wild craggy uplands of the Wickham Heights overlook the rolling grassy plain of Lafonia to the south, and the wide, Malo River and Port Salvador valleys to the north. West Falkland has its own special character of broad hills and open valleys.

One particularly important element in sculpting the rocks to create the modern Falklands landscape was the savage polar climate of the last Ice Age. Although there have been several intensely cold periods over the past few hundred thousand years, the Falklands have remained free of glaciers, with the exception of a few small ones on the highest hills. Nevertheless, the islands were repeatedly deep-frozen and battered by icy winds. This was the environment that produced the dramatic stone runs, one of the most enigmatic features of a remarkable landscape.

The stone runs are a unique, extraordinary feature of the Falkland Islands. These vast, yet intricately patterned accumulations of boulders impressed Charles Darwin when HMS Beagle passed through in 1833–34, and have continued to fascinate visitors ever since. Darwin referred to 'streams of stones' and others have written of 'stone rivers', but it is the vernacular 'stone run' that has become the common Falklands expression. They are, in fact, periglacial blockfields and blockstreams.

They are relict landforms, produced thousands of years ago under the very cold conditions of the last Ice Age.

The local term 'stone run' is applied equally to the extensive spreads of boulders and to the remarkable stripes on the hillsides produced by linear, parallel alternations of boulders and vegetated ground. Both landforms arose as innumerable cycles of freezing and thawing first broke up the rock, then heaved and sorted the resulting debris. As the seasonally thawing ground slowly crept downhill over the deeper layer of permafrost it flowed out onto lower areas to give the uncanny flat-topped surface to the bigger accumulations. The stone runs are only a few metres deep and have a sharp base where the original permafrost layer started.

The spectacular patterns produced by the stone run stripes are best seen from the air.

Excavations show that the largest boulders form the top part of the stone run with the size of the blocks then decreasing downwards. The smallest stone runs are only about a metre across, whilst the largest are up to four kilometres long and several hundred metres wide. They are entirely composed of locally derived quartzite blocks commonly up two metres across with some up to five metres.

The uppermost boulders have been leached by rainwater and are uniformly pale grey in colour. Lower down in the stone run, where the boulders have been protected from the weather, they are invariably stained orange by iron oxides.

Stone runs are most widespread and voluminous on East Falkland.

Those on West Falkland and some of the other islands tend to be smaller and more localised than those on East Falkland. 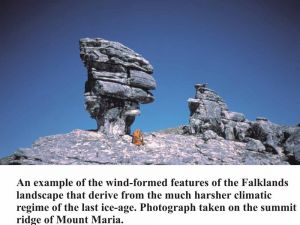 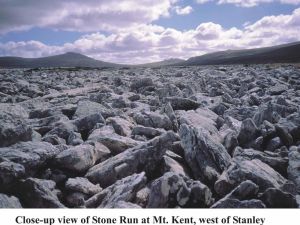 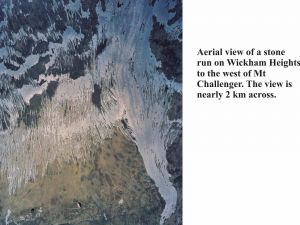 Any visitors or researchers wishing to export mineral samples (including rocks, fossils and sediment cores) must apply to the Department of Mineral Resources for an export permit. Permits require basic information about the sample and person/organisation applying. Export permits are free of charge. Contact This email address is being protected from spambots. You need JavaScript enabled to view it. if you require an export permit.